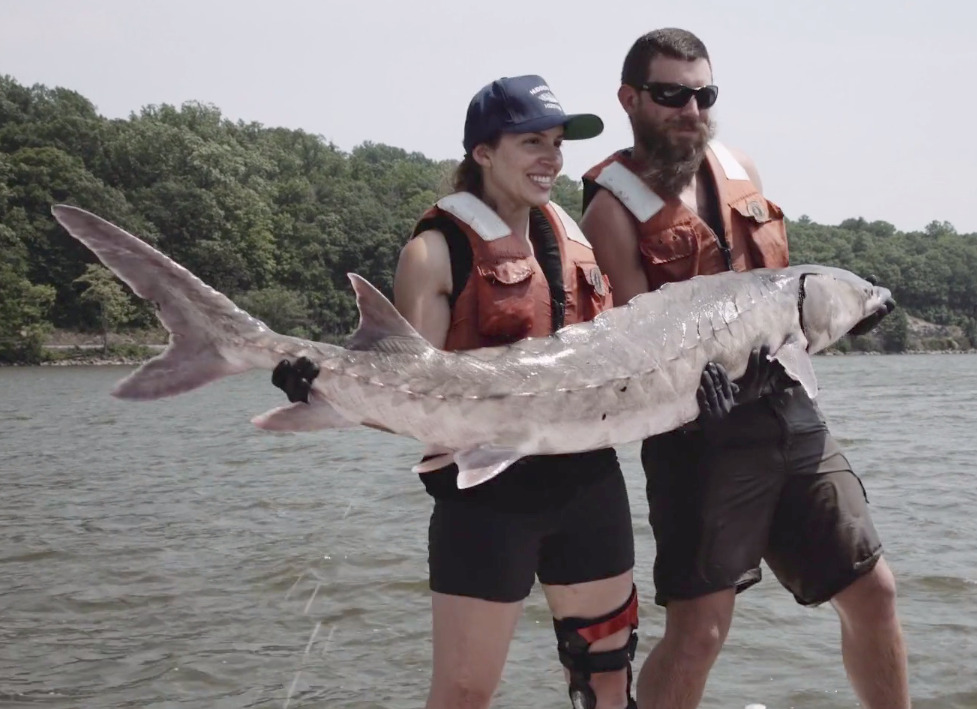 This virtual event, held on May 18, 2021, highlighted how science storytelling can be used to engage communities in watershed work and share scientific information with broader audiences. We screened the short film “A Living River” by writer, filmmaker and adventurer, Jon Bowermaster, followed by a panel discussion on water science and storytelling. The event was organized by Siena College and the Hudson River Watershed Alliance, with funding from the Consortium of Universities for the Advancement of Hydrologic Science (CUAHSI) through Let’s Talk About Water.

“A Living River” describes the incredible web of life in the Hudson River, despite its polluted reputation. From the tiny glass eels to the massive 14-foot-long Atlantic sturgeon, the Hudson River is teeming with life. The film shares work from organizations like Riverkeeper and New York State’s Department of Environmental Conservation to use lessons learned from its past as a bustling commercial fishery to its present as an ecosystem in recovery in order to protect its future. You can view the film online here.

Jon Bowermaster is an award-winning journalist, author, filmmaker, adventurer and six-time grantee of the National Geographic Expeditions Council. Jon has written eleven books and produced/directed more than thirty documentary films. He is the President of the One Ocean Media Foundation and Chairman of the Advisory Board of Adventurers and Scientists for Conservation. For the past several years, Jon and his One Ocean Media Foundation / Oceans 8 Films team have focused on a series of short films about the environmental risks to, and hopes for the Hudson River Valley, the birthplace of the American environmental movement (hudsonriverstories.com). Jon teaches a course at Bard College on multimedia environmental storytelling. He is also the host of a weekly radio show/podcast, “The Green Radio Hour with Jon Bowermaster,” at Radio Kingston.

Kathy High is an interdisciplinary artist / educator who collaborates with scientists and activists, and considers living systems, animal sentience, and ethical dilemmas of biotechnology and medical industries. She is Head of the Arts department and Professor of Video and New Media at Rensselaer Polytechnic Institute in Troy, NY. She also has a joint appointment with RPI’s biotech center and oversees a laboratory there. She is the Project Coordinator for the NATURE Lab Urban Environmental Education Center with The Sanctuary for Independent Media. She is a supporter of community DIY science and ecological art practices, and is committed to queer and feminist approaches to reshaping ecological bio-science research and learning-by-doing, and to collaborations with our local communities.

Will Lytle, aka Thorneater Comics, is a Catskills born and raised comic artist and illustrator. He’s deeply influenced by the natural environment of the Catskills, and tries to capture the form of magic they inspire. He’s been a muralist for O+ Festival Kingston, had a weekly comic in the Ulster Publishing suite of papers, decorated a window at Colette in Paris, and works as a freelance illustrator in the Mid Hudson Valley. Will is the author and illustrator of “Little One and the Water,” a children’s book about the Little Beaver Kill based on an extensive stream assessment done by the Ashokan Watershed Stream Management Program.

Branda Miller is a media artist, activist and educator, dedicated to explore new visions, use media for social justice and support independent voices. Engaged in media arts, community media, youth media, environmental justice education, and participatory design, she seeks to expand interdisciplinary creative collaborations to stimulate cultural animation, build community and strengthen the struggle for freedom of expression. She is the Arts and Education Coordinator at The Sanctuary for Independent Media in Troy, NY, and Professor of Media Arts at Rensselaer.

Dr. Anne Toomey is an interdisciplinary conservation scientist who is interested in how people connect to their natural environment and the role of scientific research in supporting that connection. Currently she holds the post of Assistant Professor at Pace University’s Department of Environmental Studies and Science, where she teaches courses on sustainability and multiple environmental perspectives. Her most recent research focuses on the links between citizen science, civic environmental stewardship, and sense of place along urban waterfronts. Anne received her Ph.D. in 2015 in Human Geography from Lancaster University in the UK and holds a dual M.A. in Natural Resources and Sustainable Development from American University in Washington, D.C. and the University for Peace in Costa Rica.  She is currently working on her first book, Research with impact: How the new sciences of decision-making can (and should) change the way that we investigate the natural world.

Dr. Anne Toomey‘s paper, “Empowerment and disempowerment in community development practice: eight roles practitioners play,” outlines strategies that can be used in community engagement and storytelling. This article was published in the Community Development Journal in 2011, and we learned during the panel that Branda Miller has been using this framework in her community-engaged storytelling practice since then!

AGU (American Geophysical Union) offers resources on science storytelling through their Sharing Science program. Their Storytelling 101 Toolkit shows the components of stories, along with prompts to help you get started. Their Paths to Engagement diagram maps out different approaches to sharing stories.

River Network has recordings of their webinar series on Putting Your Data to Its Most Effective Uses. Sessions include Data-Informed Storytelling, Data Products and Visualization Tools, Data Visualization Tools: Google Data Studio.

The Moth is a non-profit dedicated to the art and craft of storytelling. Listening to really great stories can help us better understand the elements of effective stories and how to improve our own. Some science-based stories to check out include Lisa Jackson and Man & Beast.